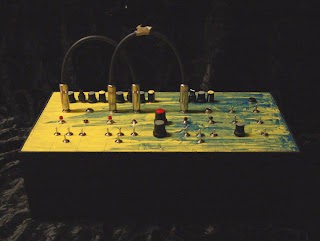 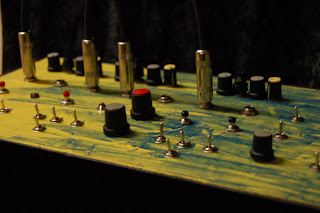 Alright. Either A-->B-->C-->Out or A-->C-->B-->Out where as A=Circuit bent DOD Grunge pedal that acts as either a through and through effect or a signal generator, B=Circuit bent DOD Flanger that has also been modded with the internal trim pots mounted for access, and C=Circuit bent Boss Overdrive/Distortion pedal. The DOD Grunge has been nicely mangled with 7 toggle switch, 2 push button and 1 knob w/toggle bends. The Flanger and Overdrive each have 4 toggle switch bends. Both the Flanger and Overdrive have on/off push buttons. A-->B-->C= nasty, heavily distorted drones, while A-->C-->B=spacier, swoopier drones and bleeeps. Nastynastynastynasty. Operates off a 9v pedal adapter and there's an on/off power toggle.
Here's some videos. ABC and ACB.
Newer Post Older Post Home